Hero Mariah Carey Music Pavarotti
+
Mariah Carey is definitely one of the best singers in the world, and maybe the best vocalist after Whitney Houston. She has such an amazing voice, with a 5-octave vocal range, that allows her to sing whatever she wants. Carey is also famous for her characteristic whistle notes. Among all her songs my favourite is Hero! I just love this song. It was released in 1993 and l yrically, the song is regarded as one of Carey's most inspirational and personal ballads  with its protagonist declaring that even though people may feel discouraged or down at times, in reality, they are "heroes" if they look inside themselves and see their own inner strength; in time, it will help them "find the way". This one of my favourite performances of Hero: But I really love her performance with Pavarotti too (what a musical  connection..!):
0

Shape of a hanging rope between two points - Mathematical analysis

Monika - An exceptional artist - Over The Hill

The initial acceleration of a 3-body system

Centripetal force of an object in an arbitrary curve

How to ease pressure on food supply - Science Daily

Elvis Presley - Always on my mind

Hanging Chain - Where is the tension greatest ?

How to vaccinate the whole world - The Economist

Benjamin Earl King - Stand by Me - An immortal song

A blog created to combine the beauty of natural sciences with the magic world of music ! 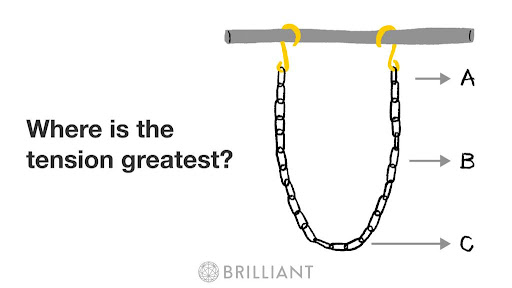 Hanging Chain - Where is the tension greatest ?

A chain hangs between two points in the same horizontal line. We want to compare the tension of the chain in 3 different points (A, B and C). Point C is lower than B and point B is lower than A.  We can answer this problem by calculating the tension at each point and using function analysis etc. But there is a much easier way to find the answer. First of all, it is essential to notice that the horizontal tension in any point is constant. Just take a small part of the chain and analyse each tension to the x-axis. Since this small part is in equilibrium, the horizontal tensions are equal and constant to a certain value. That is Tcosθ = C, where θ is the angle of the tangent and the horizontal level. So T = C/cosθ. Thus, the smaller the cosθ, the bigger the tension. Or the bigger the value of θ, the bigger the tension.  The angle θ is bigger at point A than at point B, and the angle at B is bigger than the angle at C.  So T(A) > T(B) > T(C). Of course if we know the exact coordina Mathematical analysis of the motion of a homogenous rotating hemisphere

Assume a homogenous hemisphere of radius R, that can rotate around a horizontal axis, inside the homogenous gravitational field of Earth ( g ) . If we define a coordinate system, starting from point O(0,0,0) as shown in the figure below, then the axis of rotation which is parallel to y'y and lies on the plane z=0 , has an abscissa x=ε (it passes through point A(ε,0,0))  •  We want to find what should the distance ε from O be, in order for the initial angular acceleration of the hemisphere is the maximum possible (assume that initially the hemisphere is horizontal). • If θ is the angle of the axis x′x (as shown in figure) and the vertical, then prove that for small angles θ, the hemisphere oscillates harmonically. We want to find the value of ε, so that the period of oscillation is minimum. 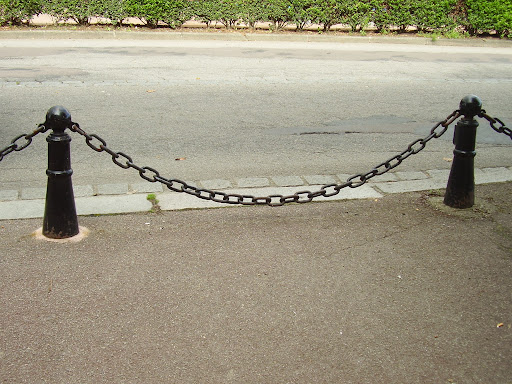 Shape of a hanging rope between two points - Mathematical analysis

Let's assume that we take a rope (or a chain as shown in the picture) and hang it up between two distinct points. We want to find the shape of the rope. What equation describes it?  Here is where physics comes. Well...everything is about physics! Let's dive in. So we see that the equation that describes the shape of the rope is of a hyperbolic form! A homogenous chain of mass density ρ and length L is kept vertical above a horizontal level. We let the chain free. What is the maximum reaction force of the horizontal level ? Well, we can solve this problem easily by writing down Newton's II Law for the chain. That is F - ρLg = mυ' + m'υ. But if we name x the height of the chain x=x(t), then the mass m that goes into the momentum is m=ρx. Thus, F - ρLg = (ρx)x'' + ρυ^2. The acceleration x'' is equal to the gravitational acceleration (x''=-g) and thus the velocity υ is given by υ^2 = 2g(L - x). So plugging that into II Law, we get F = 3ρg( L - x).  So the maximum force is when x = 0, and is equal to F=3ρgL=3Mg.  The reaction force is maximum just before the chain stops, and immediately after the reaction force balances the weight of the chain (F=Mg).

Centripetal force of an object in an arbitrary curve